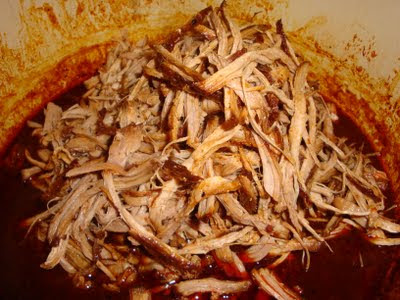 Today was one of those great Sundays because my walk to the beach smelled entirely of swine. Barbecue season was in full swing on this beautiful day in La Jolla!

This recipe is just one of a zillion reasons why David Chang is THE MAN. This guy really can do no wrong. I was a little nervous because his recipes in the Momofuku cookbook are pretty intense, but this recipe could not have been easier. Most of the pulled pork recipes I was looking at had you cook the shoulder slow and low for 8-10 hours. I was pleasantly surprised to find that Chang's recipe has you simmer the shoulder covered on the stove top for only 4 hours and the results are truly incredible. The pork just melts apart after 4 hours and the vinegary sauce is ridiculous.

I served the pork on my favorite "king" size Hawaiian roles and topped them with coleslaw. I also served some tasty baked beans on the side. The whole combination made for a pretty nice bbq trifecta. Happy porky Sunday! 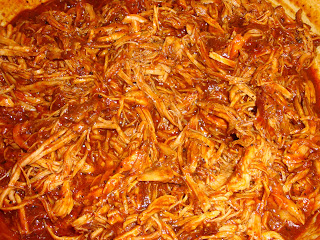 One 5-pound boneless pork shoulder, cut in half

Return the pork to the casserole. Cover and cook over low heat, turning the pork in the sauce occasionally, until very tender, about 4 hours. Transfer the pork to a large bowl; let rest for 30 minutes. 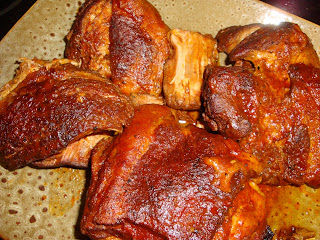 Meanwhile, skim the fat from the sauce. Boil the sauce over moderately high heat until thickened slightly, about 5 minutes. Using 2 forks, shred the pork; discard any large pieces of fat. Stir the shredded pork into the barbecue sauce. Mound the pork on the buns, top with coleslaw and serve.

Simple Slaw
Recipe from http://www.smittenkitchen.com/ and adapted from Gourmet

Toss all vegetables in a large bowl with 1 tsp each of salt and pepper. Whisk together mayonnaise, vinegar, and sugar, then toss with slaw. Chill, covered, stirring occasionally, at least 1 hour (for vegetables to wilt and flavors to blend).

Do ahead: Slaw can be chilled up to 1 day.