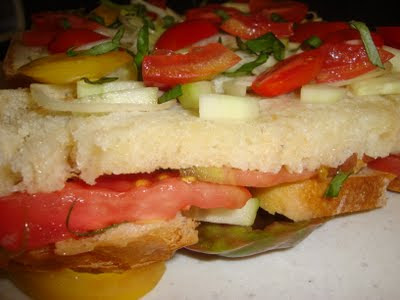 I LOVE this recipe.

Don't let the name turn you off. This tomato pudding is like a spin on panzanella or bruschetta. Not only is it really delicious, but it is so pretty to look at. Not surprising since its from The Zuni Cafe Cookbook.

You could easily serve this as a first course or side dish. It's great with some leftover roast chicken or I love to eat it with some good cheese and salumi. 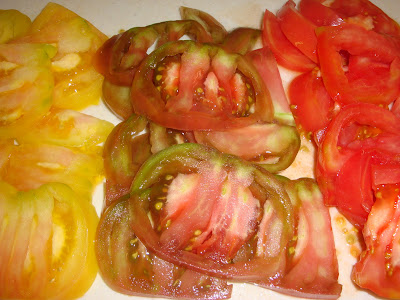 Preheat the broiler. Crisp and brown the bread lightly on one side only. Rub the crispy side of the bread with the raw garlic; set the garlic aside. Brush the soft side with water. Stack the bread and place in a plastic bag to steam and soften as it cools.

Combine the oil, vinegar, and salt and pepper to taste to make a mild vinaigrette.

Core the tomatoes. Cut in half from the stem to the blossom end, then slice crosswise into half-moons about 1/4 inch thick. Capture all the juice and add it to the vinaigrette. Pick out the bottoms and shoulders of the tomatoes. Coarsely chop them, salt lightly, and scrape into a strainer. Set this over the vinaigrette, smash and press the tomato bits with a spoon, and leave to drain.

Build the pudding in a souffle dish, wide bowl, gratin dish, or other comparable vessel with a capacity of about 1-1/2 quarts; it should be at least 3 inches deep. Rub the dish with raw garlic. Cutting the bread into appropriate shapes, carpet the bottom of the dish - leave only small gaps, but don't overlap the slices.

Next, make a solid shingled double layer of tomatoes. Scatter with a little shallot or red onion and cucumber and the herb. Whisk, then drizzle a few tablespoons of vinaigrette over all. 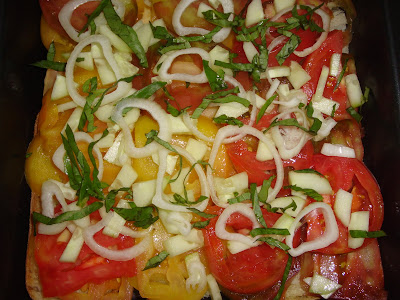 Add another layer of bread, then press with the back of a spoon or fork to encourage the tomatoes to release their juice. Repeat the sequence two or three more times, finishing with a layer of tomatoes. (You can make as many or as few layers as you like.) You may not use all the ingredients, and you should have a few spoonfuls of extra vinaigrette as well. Save both for garnishing. Poke the pudding randomly with a skewer or meat fork.

Cover with parchment paper or plastic, then choose a flat-bottomed dish that will fit just inside the pudding dish. Place on top and press down firmly. Add a weight - some kitchen item that will fit on the plate and weighs a couple of pounds. Set aside at room temperature.

After an hour or so, remove the weight and plate and check to see if the pudding is juicy enough by sliding a knife down the side of dish; angle the knife to pry the pudding away from the dish. The pudding should ooze. Taste the juice. If the pudding seems dry, drizzle a little more vinaigrette over top, adjusting its balance first if you thought the ooze was either too acidic or too oily. Press the pudding again until ready to serve.

To serve, slide a knife around the edge of the pudding, then place a platter upside down on top of the dish and carefully turn them over together. Holding platter and dish tightly, rap the platter firmly on the counter to release the pudding. Ease the dish off the pudding. Present whole, then cut into wedges. Garnish with the little tomatoes, and remaining sliced tomatoes, cucumber, and/or herbs. Spoon extra vinaigrette onto each serving to taste.
Posted by Lindsey at 5:43 PM