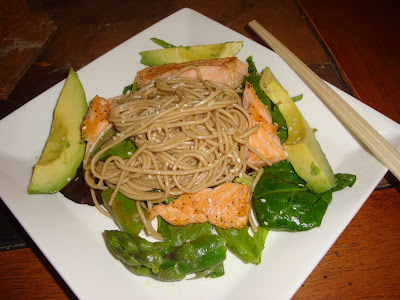 I've been making a lot of dinners with asparagus lately because it is everywhere and looks great. I am definitely adding this recipe to the healthy dinner rotation.

It's so tasty because it is not totally drenched in salad dressing. The soba noodles and vegetables are lightly dressed and you are able to actually taste them. You could easily use some grilled shrimp or portobello mushrooms instead of the salmon. Great flavor, super healthy, and low maintenance. Make this.

Cook soba noodles in a large saucepan of boiling salted water until tender but still firm to bite, stirring occasionally. Drain. Transfer to a bowl of ice water to cool. Drain well; transfer to a large bowl. Pour dressing over; toss to coat.

Heat vegetable oil in a heavy medium nonstick skillet over medium-high heat. Sprinkle salmon with sea salt and pepper. Cook until browned but still deep pink in center, about 3 minutes per side. Transfer salmon to plate; cool slightly. Wipe skillet clean. Add enough water to skillet to reach depth of 1 inch. Bring to a boil. Sprinkle sea salt over and add asparagus. Simmer until crisp-tender, 3 to 4 minutes. Drain. Add spinach and asparagus to noodles; toss to incorporate evenly. Season to taste with sea salt and pepper. Divide noodle salad among plates. Break salmon into bite-size pieces. Tuck salmon and avocado into noodles on plates. Sprinkle sesame seeds over and serve.

We had a really good white meritage (sauv blanc and semillon blend) called Montage from Bailey in Temecula. We've only been to Temecula once, but Baily was definitely the best place we visited. 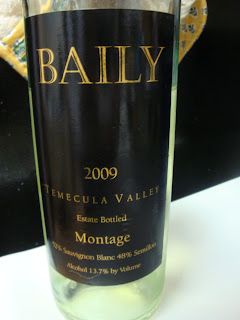