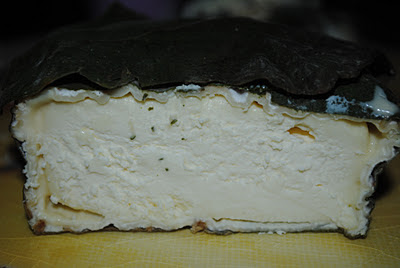 It's no secret that I have strong, emotional feelings for anything Andante. The cheese maker, Soyound Scanlan, started Andante in Petaluma in 1999. Since then she has become one of the most respected cheese makers in both America and France. This chick is no joke.
Figaro is a seasonal cheese that she only produces at the end of fig season. It is a combo of sheep and goat milk wrapped in a fig leaf that has been soaked in red wine. It's so smooth with the perfect tang and the flavor of the boozy fig leaf somehow sneaks it's way in as well.
Whenever you are lucky enough to stumble upon any sort of Andante, you should buy as much of it as you possibly can.
http://andantedairy.com/
Posted by Lindsey at 11:21 AM