and then I put an egg on it at Out The Door. 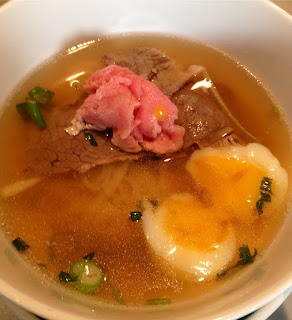 Not the best picture I've taken, but this pho was incredible. Stopped at Out The Door on Bush in San Francisco the other day. Out The Door is related to the very popular Slanted Door and offers casual Vietnamese street food. There are several Out The Door locations, but they're all different and I think the best one is on Bush. We had a great breakfast of green papaya salad, crispy imperial rolls and bahn mi, but the pho was the clear winner of the day.

Now what makes this pho so spectacular? Couple things: perfectly seasoned broth and one rowdy sous vide egg. I've had all different kinds of eggs in my pho - poached, fried, and even a raw egg dumped on top and slowly cooked by the scorching broth. None of those compare to the greatness of the sous vide egg. The special thing about it is that the egg is cooked to such perfection that the yolk maintains its gooeyness and doesn't dissolve into the broth. Get it? You can cut up the egg in the broth and the yolk oozes just a bit while still holding its form. The beauty is you can enjoy perfect bites of white and yolk in every single brothy noodley bite. It is pure flavor magic I tell you.
Posted by Lindsey at 4:42 PM