and then I put an egg on it at Napa Valley Biscuits. 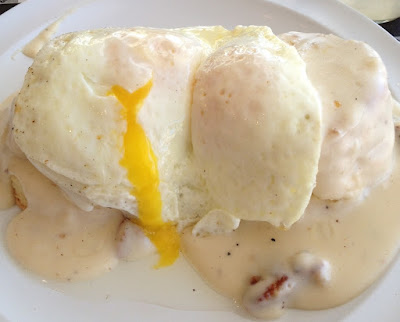 Napa Valley Biscuits opened up a couple months ago. They were so insanely busy as soon as they opened that they were forced to shut down and remodel their kitchen just to keep up with the high demand. We finally tried this place and now I understand why. Holy God was it awesome. The Pappi sliders with perfectly crisp fried chicken, nestled between two waffles, slathered with pepper jelly and a couple of slices of bacon, with maple syrup for dunking. In my opinion, The Pappi is what life is all about and is pure happiness. It literally could not be better. We also tried The Cow Poke, which is just straight up biscuits and gravy with a couple of eggs over easy. The biscuits are obviously no joke and are a mound of buttery, flaky goodness. The eggs were cooked perfectly and the sausage gravy was fantastic. This place is mainly biscuit and fried chicken heavy, but they also have a great selection of baked treats (i.e. medium rare chocolate chip cookies and cinnamon rolls) and I think I saw some pulled pork floatin around.

I would go back today, but they are closed Mondays.
Posted by Lindsey at 10:53 AM