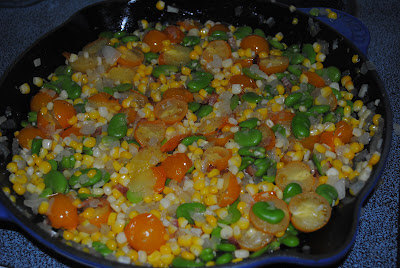 We've been loving our Hudson Ranch CSA box this season! The past three weeks we've gotten tons of fava beans, so I've been trying out lots of fava friendly recipes. This summer succotash was the favorite by far. We loved the flavor of the sweet veg and tangy vinegar mixed with the peppery arugula and salty bacon. Definitely a keeper and great way to use up that beautiful summer produce!

Summer Succotash
Slightly adapted from www.smittenkitchen.com
Serve as a side dish or veggie friendly main with garlic croutons (recipe below).


1pound fresh fava beans in pod
(If you don't have fresh you could use 1 cup frozen fava or lima beans or even edamame.)
1/4 pound bacon (about 4 slices) (If vegetarian, use 1 1/2 tablespoons olive oil in place of bacon.)

Shell fresh beans if using. In a small saucepan bring water to a boil and boil beans for 3 minutes. Remove with slotted spoon and shock in a bowl of cold water. Peel away the skins of each individual bean and set aside. (If using frozen, just defrost and you're ready to go.)

In a skillet cook bacon over moderate heat until crisp. Drain bacon on paper towels and crumble. Pour off all but about 1 tablespoon bacon fat from skillet. (If vegetarian, obviously skip bacon and just heat olive oil in skillet.) Add onion to bacon fat and cook over moderate heat, stirring, until just softened. Add garlic and cook for 1 minute more. Add tomatoes, corn, and vinegar and cook, stirring, until tomatoes just begin to lose their shape. Remove skillet from heat and gently stir beans and half of bacon. Cool succotash to room temperature and gently stir in arugula, salt, pepper and additional sherry vinegar to taste. Toss with croutons (recipe below, if using) and sprinkle with remaining bacon before serving.

*I didn't serve with the garlic croutons, but would give it a try sometime. I also spooned the succotash on top of a little bed of arugula rather than cooling it to room temp and stirring it in.


Cut three 1-inch-thick slices from middle of loaf and brush bread with oil. Lightly oil a well-seasoned ridged grill pan and heat over moderately high heat until hot but not smoking. Grill bread until golden brown on both sides. Alternately, you can run toasts under the broiler for a minute. Remove from heat and immediately rub bread both sides with cut side of garlic and sprinkle with salt. Cut into cubes and toss into succotash.