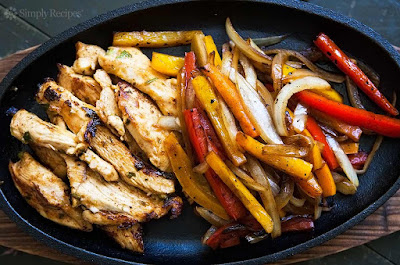 Jason randomly said he had a taste for fajitas one night and I couldn't believe I had never made them. This recipe is fantastic and couldn't be more simple. Load the chicken and veggies into your favorite tortillas or we even threw them on top of some crispy romaine and made it into a tasty fajita salad.

Sear chicken on high heat: Heat a large cast iron frying pan on high heat for 1 to 2 minutes. Add a tablespoon of canola oil (or other high smoke point oil) to the pan.
As soon as the oil begins to smoke, lay the chicken breast pieces in the pan. Depending on the size of the pan, and if you have had to cut the chicken breasts, you may have to work in batches.
Let the chicken cook undisturbed for 2-3 minutes, until you have a good sear. Once seared well on one side, turn the pieces over and cook for another 2-3 minutes until well seared on the second side.

Stack seared breasts, cover with foil and let rest: Once seared on the second side, remove to a cutting board and cover with aluminum foil to rest for 5 minutes.
Here's a tip: Stack the seared chicken breasts and then cover them in foil. Together they will retain heat better as you cook the peppers and onions.
If you want to test for doneness, cut into one piece with the tip of a sharp knife. It should be just done, if not, you can put it back in the hot pan for a minute or two.

Slice the chicken and serve: Slice the chicken across the grain into strips. Serve at once with the peppers and onions, some warm tortillas, and sides of shredded cheese, salsa, guacamole, and/or thinly sliced iceberg lettuce dressed with vinegar and salt.