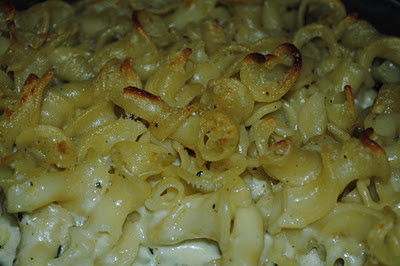 This mac & cheese recipe is a keeper because it's super simple and straightforward. The four cheese combo gives it a really great, complex flavor. Don't get me wrong, I love a mac & cheese with bacon and truffle oil and all that stuff, but sometimes don't ya just want a straight up mac & cheese? Great side dish for any holiday meal and real easy to bake and reheat. 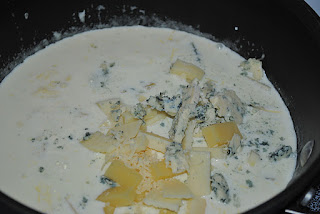 Preheat the oven to 350 degrees. Bring a large pot of well salted water to a boil for the pasta.

Pour the cream into a large saucepan and place it over medium heat, watching carefully to avoid scorching. Bring the cream to a simmer and reduce it by 1/4, about 5 minutes. Reduce the heat to low and add the cheeses, stirring occasionally while the cheese melts, about 10 minutes.

While the cheese is melting, cook the pasta until it is tender to the bite, about 8-10 minutes. (Cook it 1-2 minutes less than you normally would because it will finish cooking in the oven.) Drain well.

Add the cooked pasta to the cream sauce mixture, toss to coat, and season with pepper. (Salt should not be needed due to the saltiness of the cheese.)

Transfer to a greased casserole dish or baking pan. Bake until the macaroni and cheese is hot and creamy and a golden crust has formed on the top, about 20 minutes. (After 20 minutes, my top hadn't browned enough so I let it sit under the broiler for a couple minutes and that did the trick.)
Posted by Lindsey at 12:46 PM