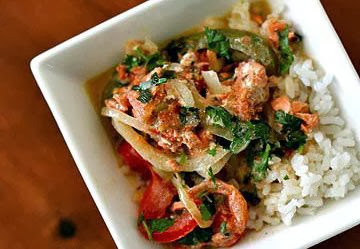 Had dinner with a friend over the weekend that just got back from his Tahitian honeymoon. He said the best thing they ate was any kind of fish in a lime/coconut broth and I immediately had a taste for something like it.

While this recipe isn't Tahitian, it's the same idea. Marinated fish simmered in delicious coconut milk. Perfect for a weeknight dinner because it came together real fast.
Salmon Fish Stew, Brazilian Style
Recipe and picture from www.simplyrecipes.com

1 Mix together the marinade ingredients. Let the salmon marinate in this paste for at least 2 hours. The longer, the better.

3 Bring to a boil, reduce heat to low, cover and let simmer for 30 minutes to an hour, until the vegetables are cooked through.
Serve with rice; garnish with remaining cilantro